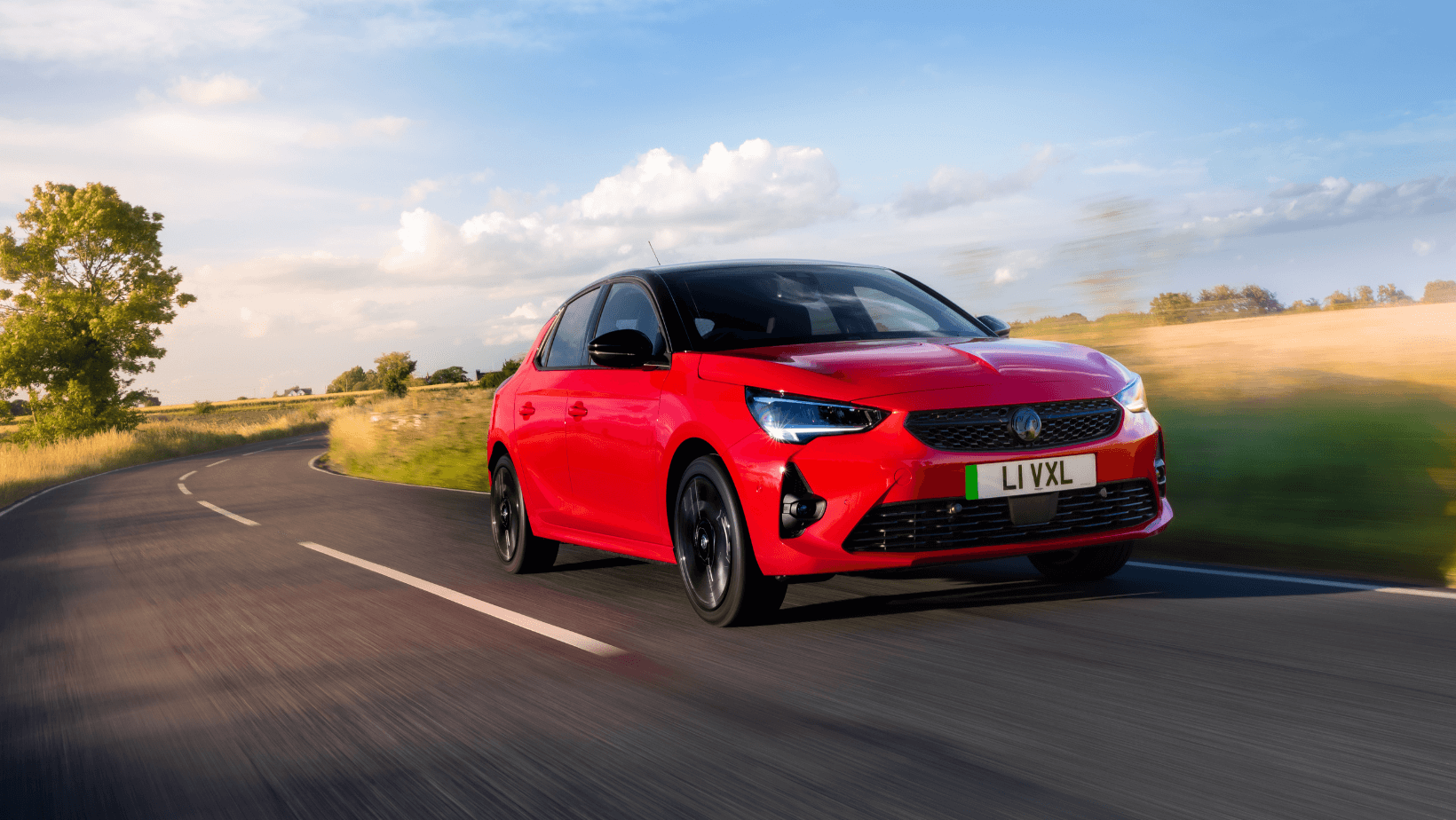 By Josh Bowness
Oct 5, 2022
As small cars go, the Vauxhall Corsa has always been a very popular one. As an electric car, it’s quite clever, too.

In this Vauxhall Corsa-e review, we’ll go through what you need to know about Vauxhall’s latest supermini offering and how it compares to other cars in its class.

Whatever your opinion on Vauxhalls of old (and indeed new), there’s no denying the Corsa has consistently been a front runner in the UK car market, making a name for itself as a well-equipped, competitively priced small car.

Replacing the Nova in 1993, the Vauxhall Corsa has sold extremely well in the UK. In 2021 it was the UKs best-selling car, comfortably beating others like the Tesla Model 3 and MINI Cooper – and it’s been in the top five since 2001. We clearly like them here in Britain, then.

Now in its fifth generation, it’s setting out to bring itself bang up to date with its rivals and show people you don’t need to buy expensive (or big) to get the latest tech.

For the first time in its history, you can now get the Vauxhall Corsa as a petrol, diesel or electric car. We’ll be focusing on the electric variant, the Corsa-e, in this review.

Miles apart from Vauxhalls of old 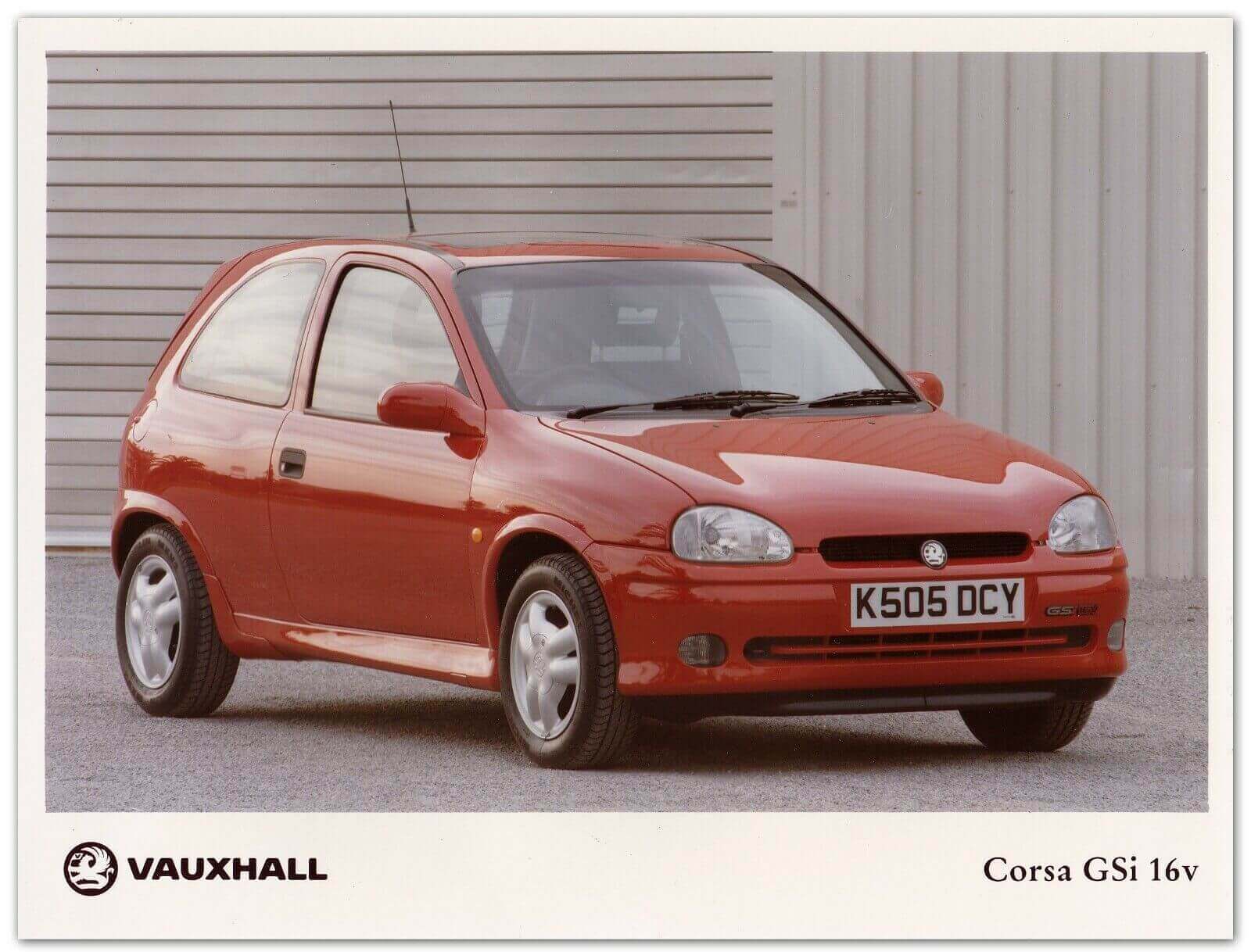 “A much rounder, softer design was created, with ‘saucer-eye’ headlamps to tie in with its cute looks” said Vauxhall. That first generation proudly boasted higher safety standards than its rival with shiny new things known as ‘front airbags’. The new Corsa-e, you’ll be pleased to hear, is a far cry from that early model.

With a much sharper, larger exterior, the 2022 Vauxhall Corsa-e offers more space up front with a much more premium feeling cabin. That, of course, could be said for any car compared with that of one from nearly thirty years ago, but it does go to show how far cars of all sizes have come over the years. Small cars are now just as comfortable, quiet, and refined as their bigger, more expensive siblings; they no longer feel small. We’ll leave that to you to decide whether that’s a good thing or not. 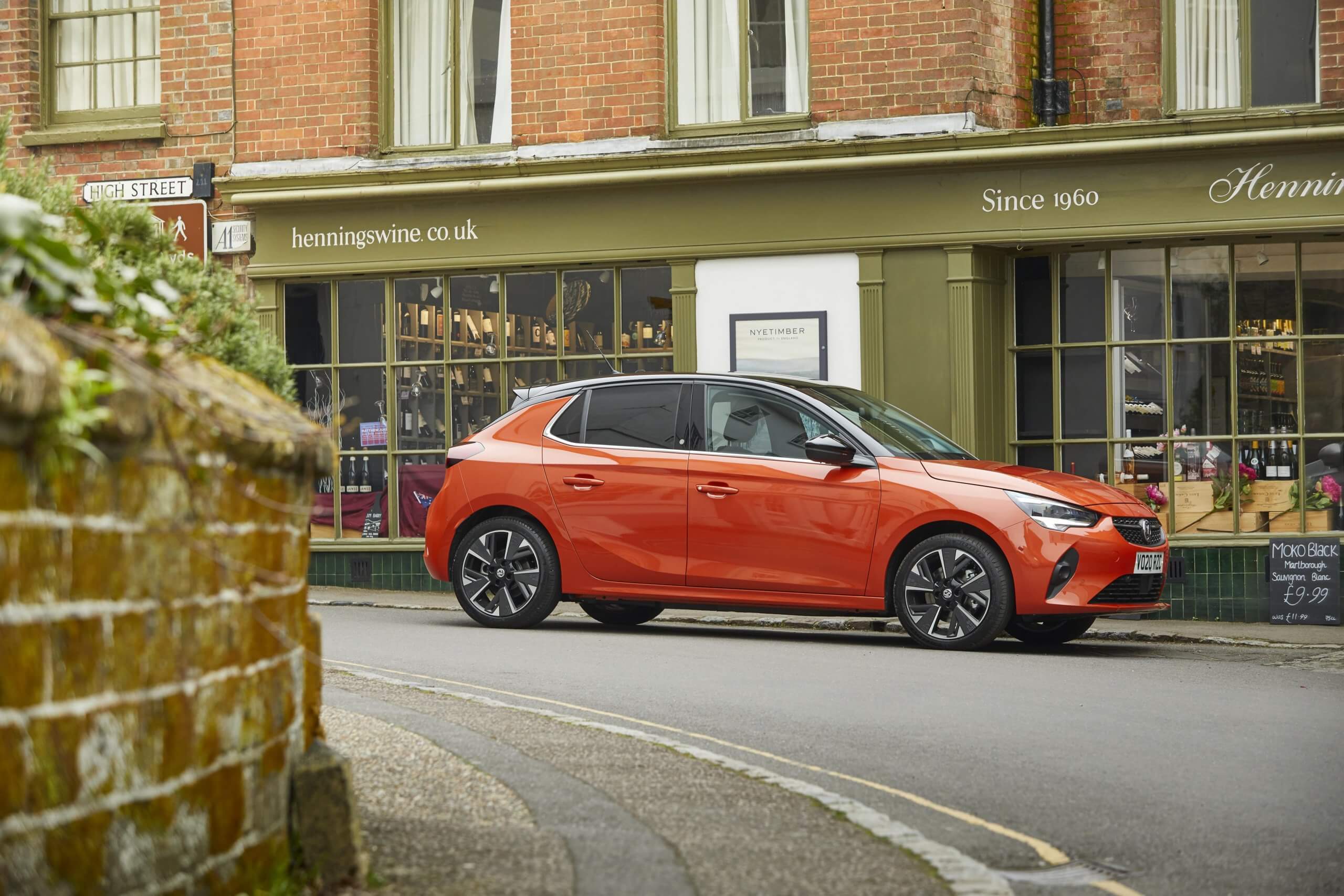 Something that’s apparent in the Corsa-e’s development is how much big-car-kit it now has. No longer are front electric windows a luxury, oh no, this new one is full of useful tech.

In terms of the interior, the Corsa-e offers loads for your money regardless of which trim you choose. Inside, the GS Line gives you: a 7” central touchscreen with Apple CarPlay and Android Auto, a 7” digital instrument cluster, rear parking sensors and keyless start. The Ultimate upgrades you to: a 10” central touchscreen, a reversing camera with front parking sensors thrown in, heated steering wheel, heated front seats and keyless entry. Outside, both have sporty styling cues with alloy-effect pedals and 17” bi-colour alloy wheels. 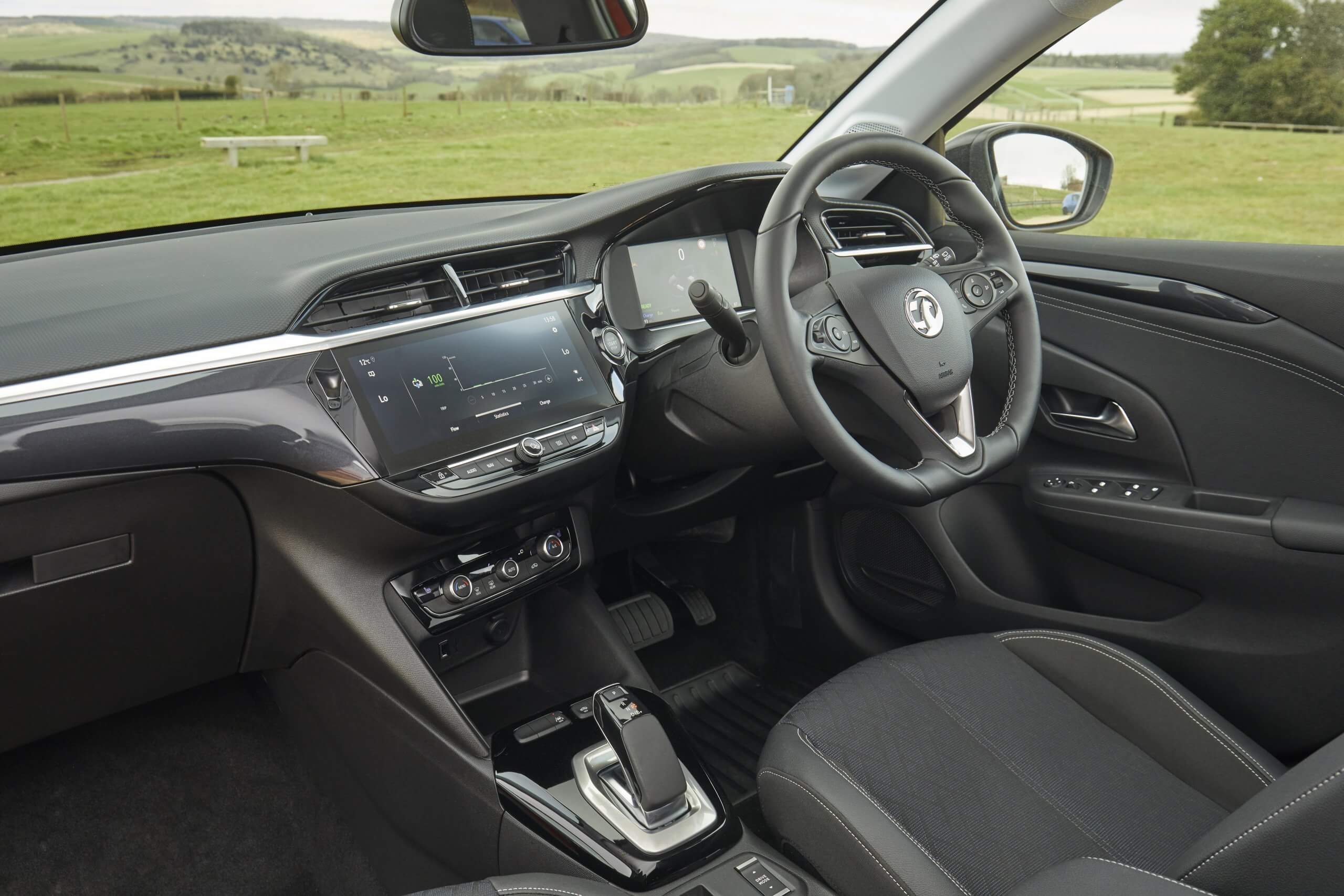 Technology to help you on the road is generous too, with the GS Line offering: LED headlights, cruise control, automatic lights and automatic rain sensing wipers. The Ultimate takes it that one step further again with (deep breath): adaptive cruise control, enhanced automated emergency breaking for the city, a panoramic rear-view camera and Vauxhall’s IntelliLux adaptive LED® matrix headlights with LED taillights. This means they automatically switch to main beam outside of urban areas and continuously scan the road, adapting the range, distribution and height of the headlights to stop dazzling oncoming drivers. See? Big car features.

It’s obvious Vauxhall are really trying to make the Corsa-e feel like a more grown up, premium offering than it’s ever been before. And they’re definitely getting somewhere on that front too, a good example being the leather wrapped steering wheel as standard across the range.

Although it’s not particularly striking inside, it’s functional, clearly laid out and easy to use and understand. What can put people off electric cars are the fact they’re, sometimes, a bit too ‘out there’ with their styling. The Corsa-e is the opposite: it’s a normal small car, with big car features, that happens to be electric. We think that’s a win.

How powerful is it? What’s the range like? How long does it take to charge? All great questions – here are the answers:

For context, the equivalent petrol powered Corsa (a 1.2 128hp petrol unit with 8-speed automatic gearbox) has a similar 0-60mph time but much higher top speed – 129mph over the electric’s 93. Top speed isn’t really relevant for this type of car, though, so we’d argue the ICE beating 0-30mph response from the electric version is what’s important.

How big is it?

People of all sizes won’t have any issues in the front – the seats are supportive and adjust well, including the steering wheel which has great reach and rake adjustment. It’s easy to get a comfortable driving position in the Corsa-e.

Where it falls a touch short are the back seats. If you’ve got a 6ft person in front of you, your knees will almost definitely brush the front seats if you’re an adult. But, again, this is a small car not really aimed at carrying adults in the back long distances; children would be absolutely fine, with ISOFIX points for child seats too.

Headroom is suitably okay in the back, with Vauxhall doing well to make sure the electric version isn’t compromised over the ICE variants by having the batteries underneath.

The boot has 309 litres of space, which puts it right in the middle of its rivals in this class. There’s a slight lip to lift things over the bumper, but it’s not too disruptive. 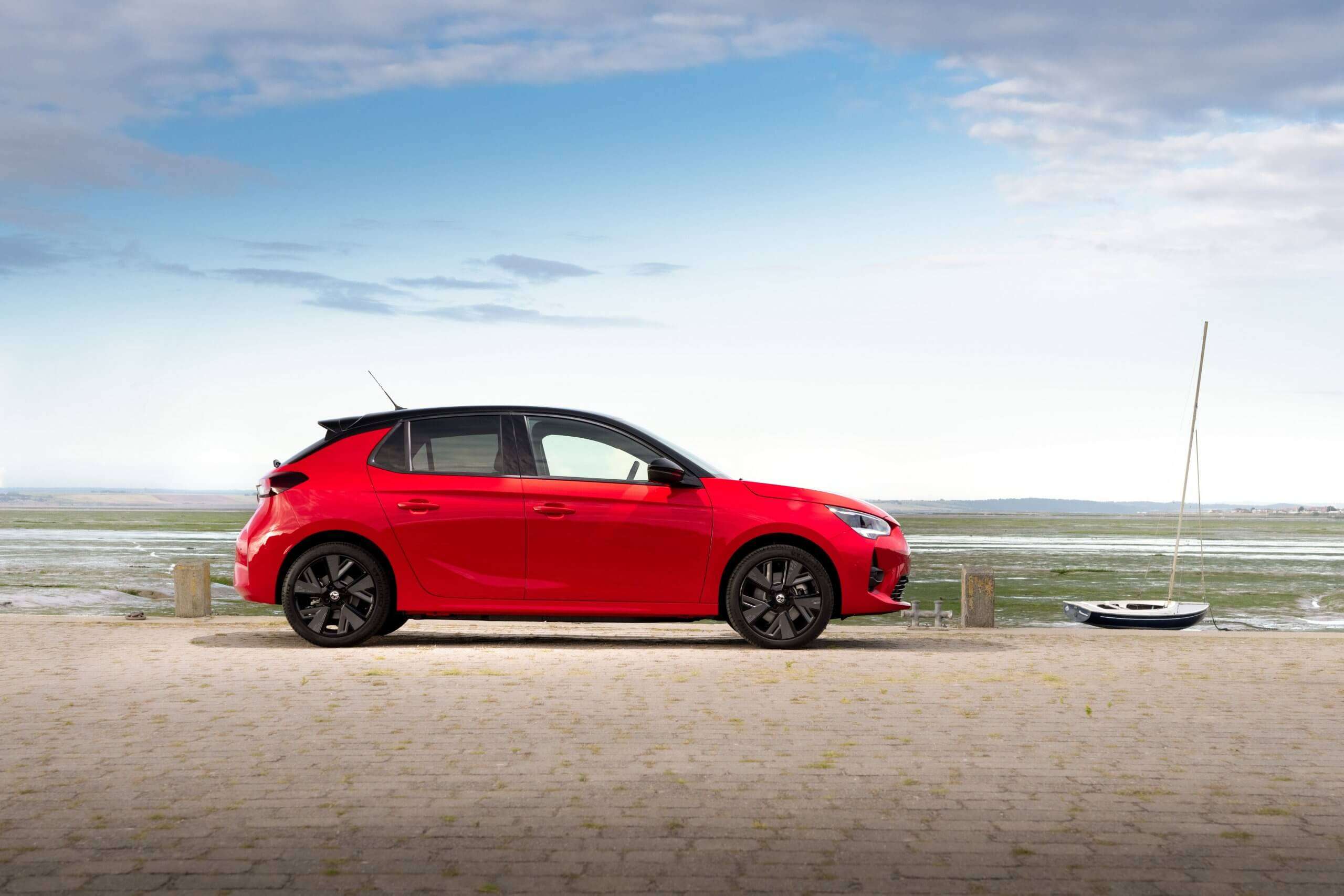 It’s important to remember, of course, like all electric cars that power mentioned above is instant unlike its petrol equivalents. There’s no waiting for the engine to build revs or transmission to change gear. It makes driving the Corsa-e about town a doddle.

The instant power from the electric motor makes it really nippy through traffic and pulling away at roundabouts, with light steering making it easy to get to grips with, whatever your driving skill level.

That said, the trade-off for the lighter steering means it’s somewhat vague on twistier, faster roads, and the harder suspension sometimes finds potholes a little jarring if the car isn’t settled. But what makes the Corsa-e stand-out against previous iterations of small electric cars is that it doesn’t feel remotely out of its depth on the motorway.

It’s quiet enough with no noise from the motor and that previously harder suspension set up settles and becomes comfortable at higher speeds. Plus, in Ultimate trim, the adaptive cruise control makes long journeys extremely relaxing. At long last, a small electric car that will happily let you push past 60mph.

What about its rivals?

You could argue its biggest rival is… itself. The petrol version of the Corsa is cheaper to purchase, sure, but the ongoing savings you’d make with the electric model (plus the fact it’s quicker and quieter) mean we think the electric version is the one to go for. Where it counts is this: petrol variants are slightly slower to accelerate and would, obviously, cost more to run with fuel and Vehicle Excise Duty (or ‘Road Tax’). Let’s not forget the oil, belts, servicing, and other maintenance that engine will require, too. Yes, the petrol version will go further on ‘one tank of fuel’ than the EV, but it’ll cost more doing it, and for a supermini that’ll spend most its time in the city or suburbs, the electric version is much better for the environment. It varies, of course, but, in most use cases, the Corsa-e is a very tempting, perfectly useable alternative to its petrol sibling.

Against other EVs? Well, the Renault ZOE is more comfortable at lower speeds, has a slightly bigger boot and will likely go further on a full charge (with a 190-mile real world range), but it’s considerably less nippy and not as happy at higher speeds.

Corsa-e’s sister car, e-208 from Peugeot, has a sharper exterior and far plusher interior, but the quirky steering wheel and centre console of that car might alienate some drivers who just want “a car”, rather than “a styling accessory”. Corsa-e is also better equipped in the lower spec variants.

If space is your priority, you’d be better off looking at the similarly priced MG5 EV estate or Nissan Leaf.

Or, if you’re looking for something that’ll turn heads, the retro-inspired Honda e is a more attractive package inside and out (though nowhere near as functional as the Corsa-e).

The Vauxhall Corsa has come a long way since the 90s. This latest generation is a great value, well equipped all-rounder that is more than fast enough, and will go far enough, for most people. If you’re new to electric cars, or just want something simple and easy to drive with loads of useful tech, the Vauxhall Corsa-e is not one to be overlooked. It’s no wonder we love them in the UK.

The Vauxhall Corsa-e is available on an all-inclusive elmo subscription. We’re on a mission to make switching to an electric car smart, seamless and sustainable, for everybody; if you’re not sure if an EV is right for you, then take our free Electric Car Suitability Tool to see how an electric car would fit into your lifestyle: