What is Salary Sacrifice?

What are the benefits of getting an electric car through salary sacrifice?

How does it work with elmo?

How much does the scheme cost with elmo?

What admin is involved?

Ready to get started?

What is Salary Sacrifice?

A salary scheme in the UK allows employees to “sacrifice” some of their gross salary in return for an electric car which is hired on subscription from elmo by their employer.

Instead of subscribing directly and paying for the car from post-tax pay, the monthly subscription cost is taken from pre-tax pay which reduces the employee’s tax liability and allows them to save an astonishing 30-60% of the cost (depending on their salary).

Salary sacrifice cars are not company cars but are still viewed as an employee benefit by HMRC. This means that the car’s value as a benefit-in-kind (BIK) is taxable. The BIK rate on electric car set by HMRC is currently very low (2% until April 2025, then rising by 1% each year to 5% in April 2028) making salary sacrifice one of the most affordable ways to go electric.

These savings help make the switch to electric cars not only possible, but also attractive for many. As a result, more and more businesses are using salary sacrifice to attract and retain talent while supporting a greener future.

What are the benefits of getting an electric car through salary sacrifice?

There are plenty of benefits to setting up an electric car salary sacrifice scheme on subscription, both for the employer and the employee.

Benefits for the employees:

These benefits are all on top of the fantastic benefits experienced by electric car drivers, including attractive savings on fuel costs, congestion charges, and more. 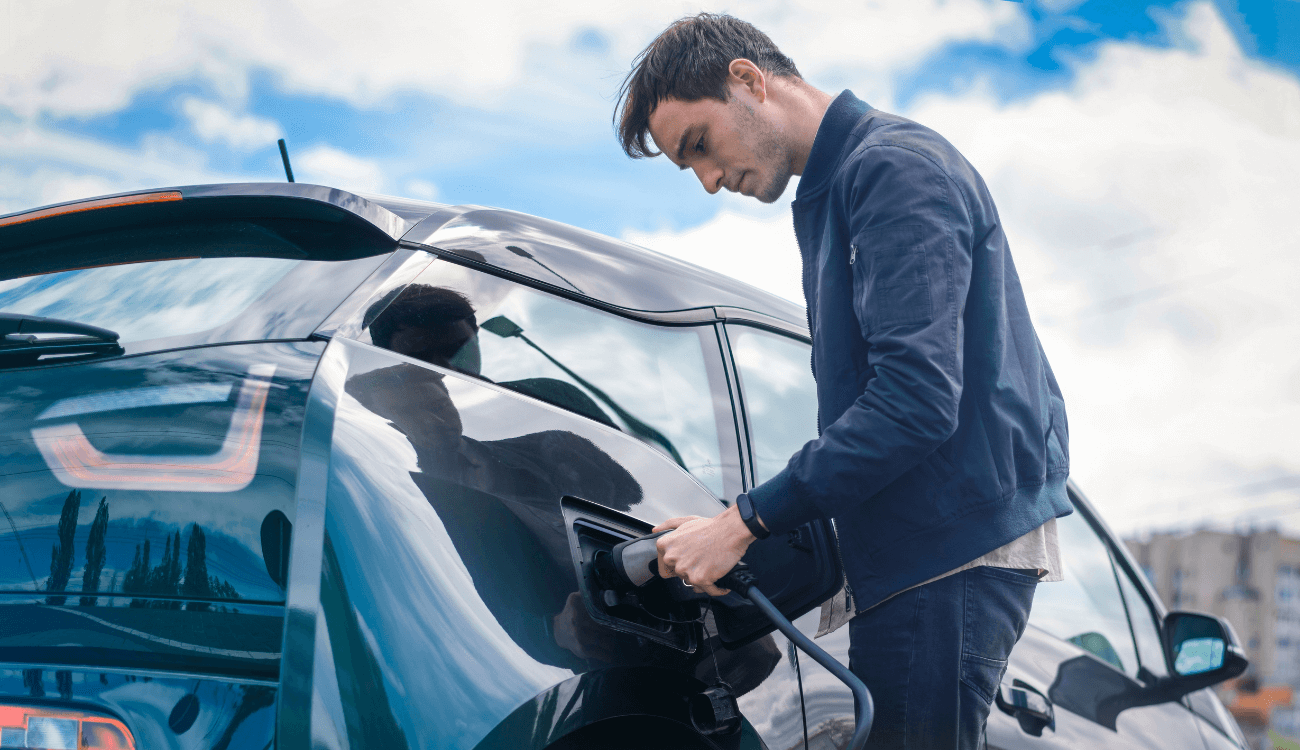 How does it work with elmo?

We’ve made the entire salary sacrifice process as quick and simple as possible, so your business avoids admin headaches while your employees take advantage of a high-value benefit.

For the full guide please see our How it Works for Salary Sacrifice.

Employees approved by their employer to take part in the scheme get all the usual benefits of subscribing with elmo, but at a 30-60% discount depending on their salary. There’s no deposit to pay, fast delivery and setup and a convenient all-inclusive package which covers:

You can also add extra mileage, up to two additional drivers and a range of charging options. 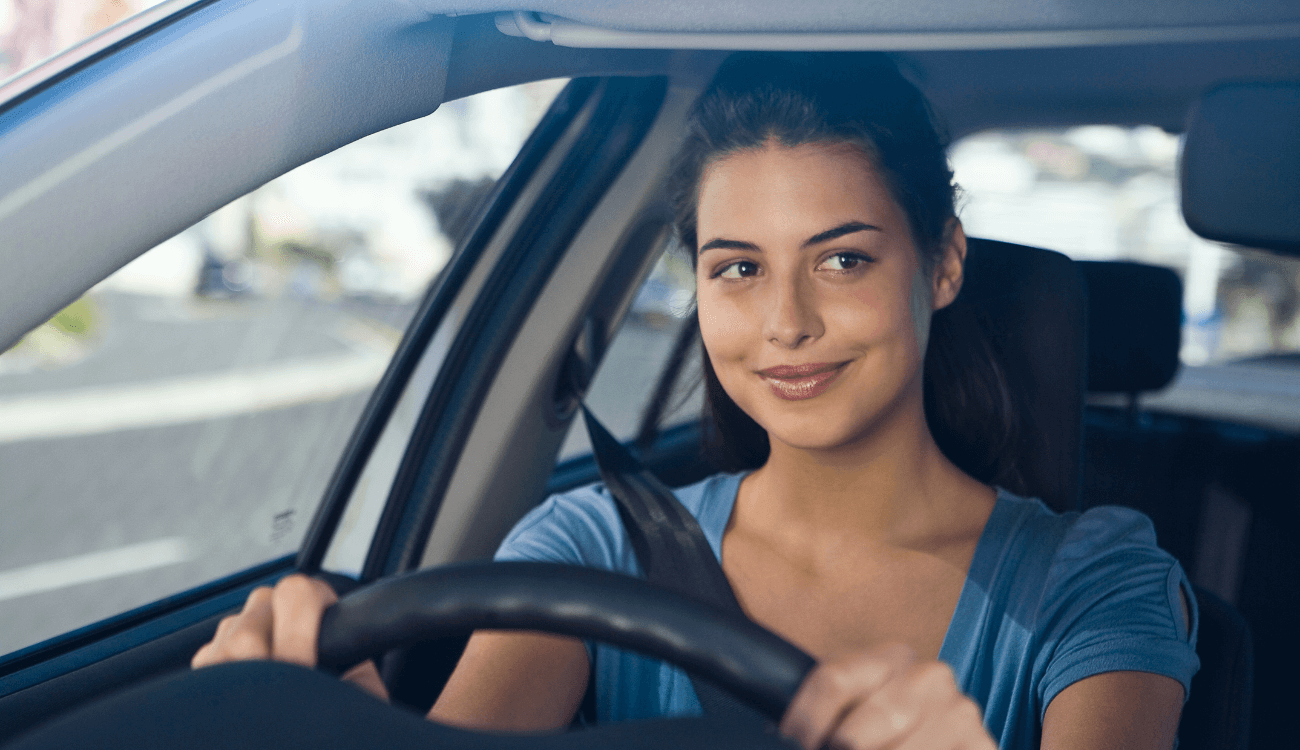 How much does elmo’s salary sacrifice scheme cost?

Our scheme is designed to be a win-win for employers and employees.

Savings for the business

Because employees pay for their electric car subscription via salary sacrifice, the cost of running the scheme for your business is effectively zero. Please contact salarysacrifice@elmodrive.com for more details.

Unlike multi-year leases, we also don’t charge your business early termination fees in the event you choose to discontinue the scheme or an employee leaves the business.

Salary sacrifice is designed to help employees access significant savings (currently 30-60% on electric cars). The cost of the subscription is taken from an employee’s gross salary which dramatically reduces their tax liability and creating the saving. 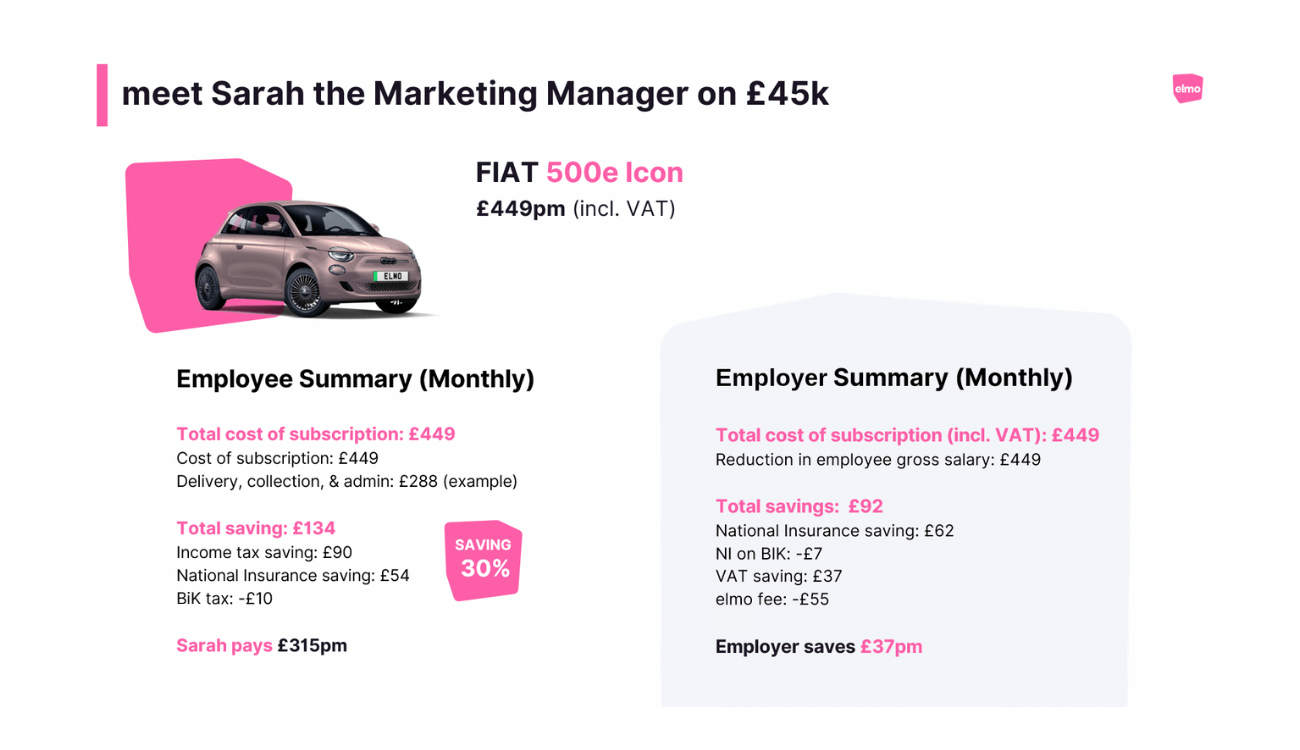 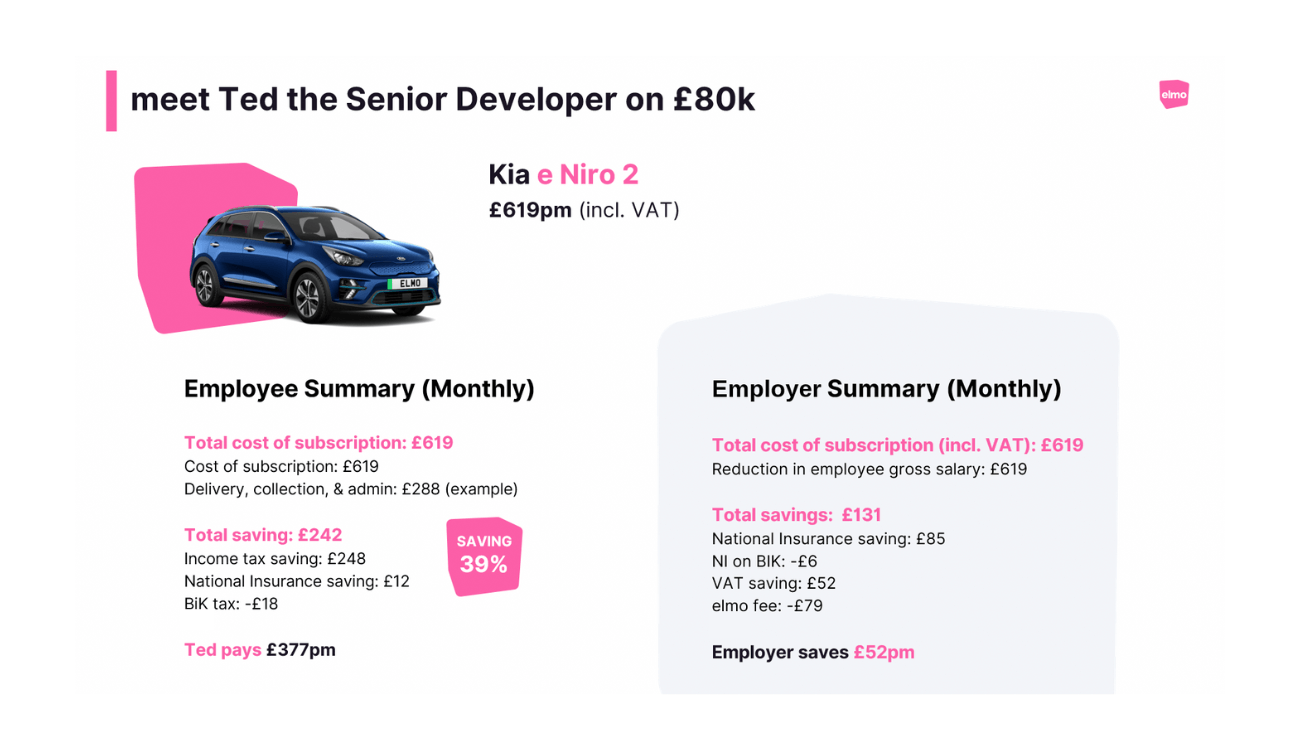 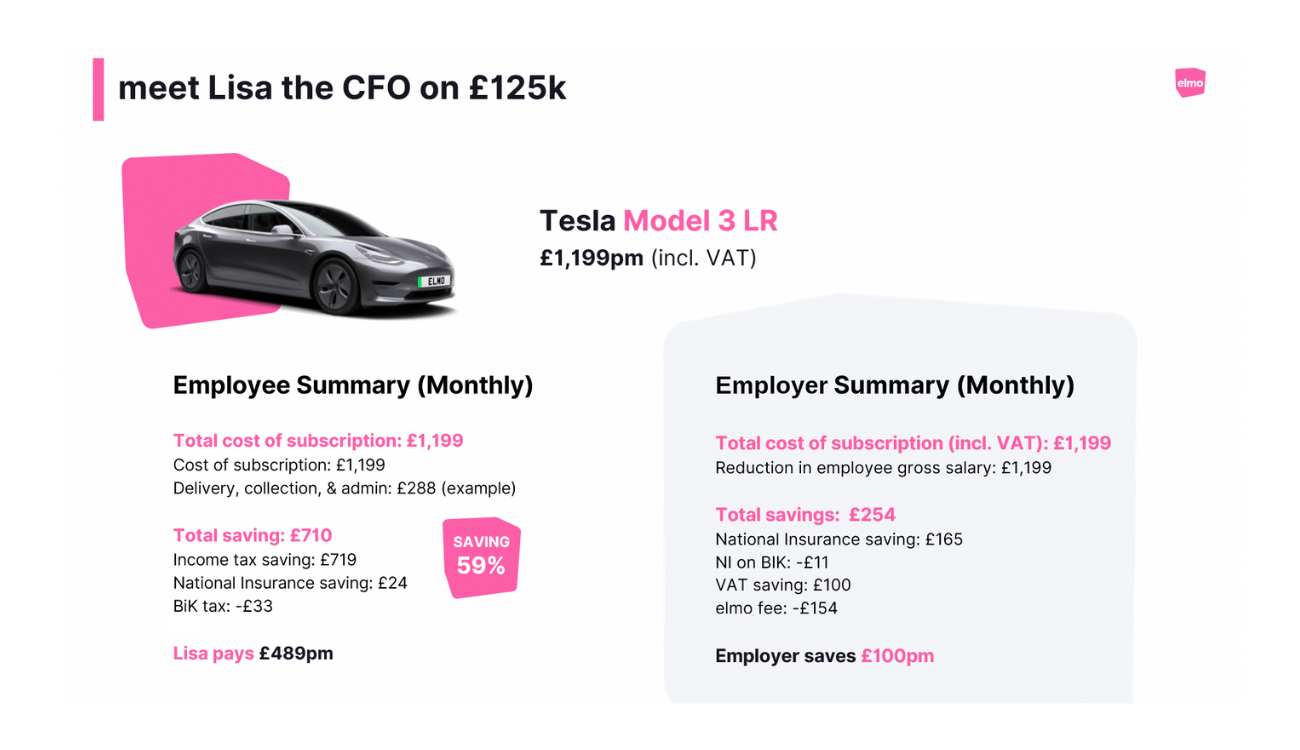 What admin is involved?

An electric car salary sacrifice scheme through elmo is designed to be as quick and simple as possible, so we do most of the work for you. To do this, we:

Ready to get started?

If you’re interested in enrolling your business in the scheme, click the button below to fill out a quick form, and our team will send you an employer and employee manual, explainer deck, and an overview of our salary sacrifice offering.

If you’re an employee and you’re interested in saving 30-60% through salary sacrifice, please share this page with your employer and request an Explainer Deck from salarysacrifice@elmodrive.com

Are there any risks to the company?

We have tried to remove as much of the risk from the employer as possible. That’s why, unlike a salary sacrifice lease, with elmo there are no early termination fees if a staff member leaves the business.

If an employee leaves, can the car be reallocated?

Yes, we can either take the car back with no early termination fee or we can switch the subscription to a different employee (provided they are eligible).

Unfortunately not, we can only provide our salary sacrifice service to incorporated entities e.g. LTD or LLC businesses.

Does a company need to be a certain size to be eligible?

Provided the business is an incorporated entity, we can operate the scheme for one-person bands and large corporations.

Does salary sacrifice for electric cars count as a non-cash benefit?

Yes! Which is why we’re pleased to now be able to offer this benefit to employers and employees alike.

How long does it take to roll out the scheme?

We’ve worked hard to streamline the process and take all the admin and legwork out of the process for businesses. We can usually get you set up in a week, then it just depends on how quickly you can engage your staff. Once they are enrolled, we can usually deliver their salary sacrifice car in a week!

How does payroll admin work?

For each Salary Sacrifice Subscription, we will send payroll instructions to you monthly detailing employee salary deductions and BIK amounts. We will also send you completed P46 (Car) forms to be submitted to HMRC at the start and end of each subscription, as well as the P11D form at the end of each tax year.

There are several rules that apply to a salary sacrifice scheme offered by any business in the UK:

What are the tax benefits of an electric car salary sacrifice scheme?

With an electric car salary sacrifice scheme in the UK, there are several attractive tax benefits.

An employee is not taxed on the salary they sacrifice as part of the scheme. However, employees are liable for benefit in kind tax, which is just 2% until the 24/25 tax year. With BIK as high as 37% for petrol or diesel cars, the benefits are huge.

Because part of an employee’s salary is given up, it also results in smaller National Insurance payments both from the employee’s and the employer’s point of view.

Is electric car salary sacrifice worth it?

For many people, salary sacrifice is the cheapest way to switch to an electric car. Depending on how much tax someone pays (i.e. how high their salary is), the more they can save – somewhere between 30-60% depending on your tax bracket.

Will an electric car salary sacrifice affect your pension or other benefits?

Companies usually calculate pension contributions using notional salary (an employee’s salary before any salary sacrifice contributions such as a car or childcare). So your pension contribution could be impacted, especially if you are under 3 years from retirement. A private pension like a SIPP should not be affected. We recommend employees seek professional advice from their company or an Independent Financial Adviser before signing up for the scheme.

Would using the salary sacrifice scheme affect a mortgage application?

No, mortgage lenders should not include a salary sacrifice car as part of your affordability assessments.

How does this affect mileage costs for business travel?

This varies depending on whether the car is considered a company car, or a personal car being used for business travel. For company cars, the Government currently advises a rate of 5 pence per mile for fully electric cars. Hybrid cars are treated as either petrol or diesel for fuel rates – see the Advisory Fuel Rates for more information. If employees use their own personal vehicle (as would be the case with an elmo subscription), the Mileage Allowance Payments for electric cars are the same as for ICE vehicles: 45p per mile for the first 10,000 miles per year, and 25p per mile after that.

Are you allowed more than one car in your household?

Are only certain car models available?

With elmo you can choose any of our available models for salary sacrifice, provided that the cost does not reduce your statutory pay below minimum wage.

Do the cars need to be used for business purposes only?

No, our salary sacrifice cars can be used for both business and personal use.

Can I reclaim VAT and do the invoices include a VAT breakdown?

If your company is VAT registered, we will calculate the change in VAT for your VAT returns. You can usually reclaim 50% of the VAT on the subscription and 100% of the VAT on any ancillary services and other charges. The invoices you receive monthly for each subscription include a breakdown of VAT to support your reclaims process.​

What legal documents are involved?

How will the scheme affect my salary?

Under the scheme, you reduce your annual pre-tax salary in exchange for an electric car subscription as a benefit provided by your employer.

By reducing your salary and receiving the benefit in return, you save on income tax and National Insurance. You do incur a benefit-in-kind tax (“BIK”), but the BIK rate on electric cars is only 1% in 21/22 tax year and 2% for the three following years. Your total savings after everything is taken into account should be between 30% and 60% of the advertised subscription cost (depending on your salary).