We have a range of electric cars from Ford available on our all inclusive monthly subscription model. Read on for more info on our range and Ford’s history in the EV space.

Here is why Ford electric cars are so popular

Our range of Ford electric cars

How long has Ford been producing EVs?

What is it like to drive a Ford electric car?

How do Ford EVs compare to its non-electric cars?

What other benefits come with owning a Ford EV?

Ready to drive your own Ford EV?

Here is why Ford electric cars are so popular

For well over a century, Ford has been one of the biggest names in the automotive industry and has consistently paved the way when it comes to quality and innovation.

Now, as motoring enters the electric era, Ford continues to develop high-quality, affordable cars that are cheaper to drive and have a much more positive impact on the environment.

Our range of Ford electric cars

How long has Ford been producing EVs?

Being friends with Thomas Edison, Henry Ford realised the potential of the electric car even while the internal combustion engine was still in its infancy. In fact, Ford began working on its first electric car in 1914, with early models capable of a range of up to 100 miles.

However, technology couldn’t quite keep up with Ford’s ambition. Throughout the last hundred years, Ford has continued to dabble in EVs, but only now has the technology progressed to the point where consumers can get excited.

Ford’s first modern electric car, the Focus Electric announced in 2009, showed the world that an EV can be indistinguishable from its petrol or diesel counterpart. Now, Ford has announced that by the year 2030 they will only produce electric vehicles – how far they’ve come!

What is it like to drive a Ford electric car?

Ford electric cars are spacious, fun to drive, and have great range – that means you can spend more time driving in comfort than worrying about charging your battery. With the Mach-E boasting 580Nm of torque, they’re also quicker than you might realise and handle like a dream.

What are some standout features of a Ford EV?

The Mach-E 75kWh has a fantastic range of up to 273 miles. It offers all the features you’d expect from an electric SUV, with the added prestige of having the Mustang badge.

They’re sleek, stylish, and loaded with tech, including a 15-inch touchscreen infotainment system, fast charging and have a ‘frunk’ – allowing for even more storage. There’s also additional safety features including Autonomous Emergency Braking and Forward Collision Warning which come as standard.

How do Ford’s EVs compare to its non-electric cars?

By combining more than a hundred years of experience with the advancements in EV tech over the past two decades, Ford has created a range of electric vehicles that match – if not improve on – their fuel-based counterparts. EVs are fast, quiet, and offer smooth rides.

And these are all in addition to the incredible cost-based benefits that come with driving an electric car. Not only is running an EV cheaper than a petrol or diesel car thanks to exceptionally lower fuel costs, but EVs are also exempt from road tax and cost less to service and maintain.

What other benefits come with owning a Ford EV?

If you regularly drive into major cities across the UK, with a Ford electric car you won’t have to pay congestion charges. There are also many free charging stations across the country, helping the money-saving to continue.

On top of this, driving an EV allows you to do your part toward lessening the impact on our environment. What’s not to love about that?

While Ford produces great petrol and diesel cars, the benefits of an EV mean they’re the perfect choice for drivers looking to make the switch to electric: 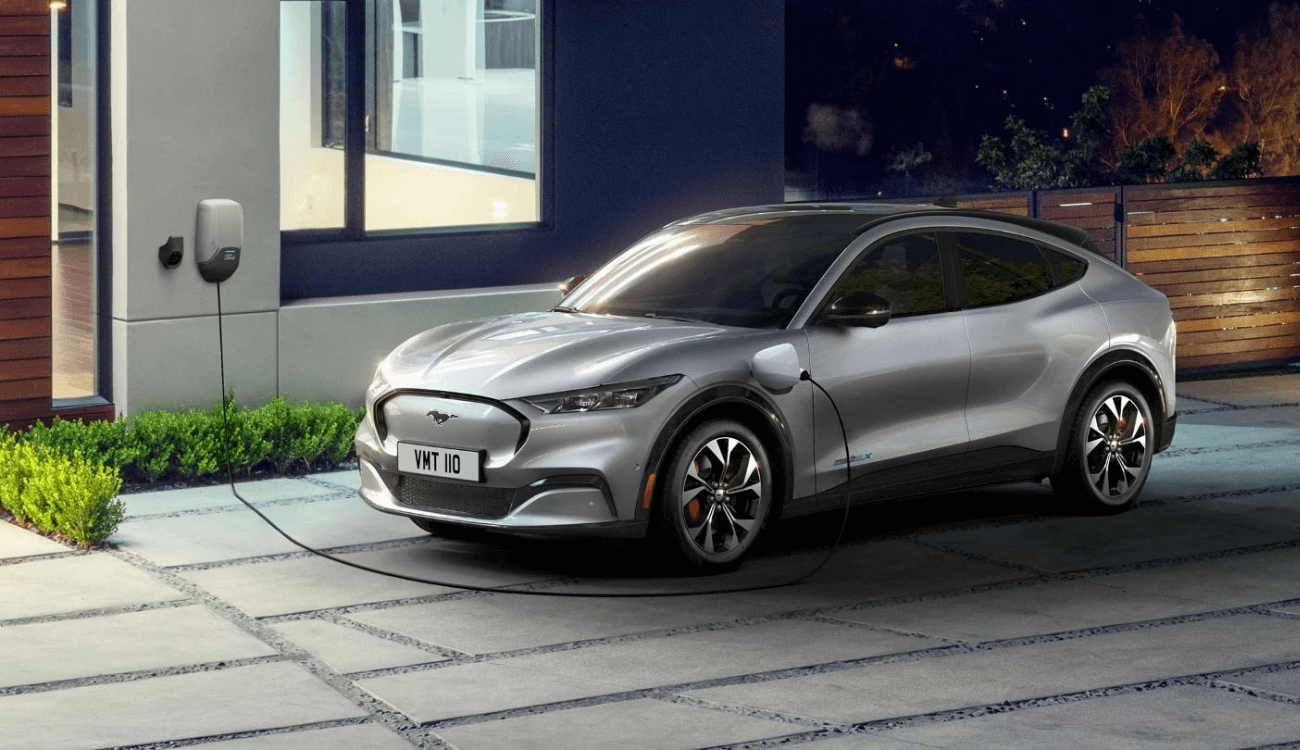 Unfortunately, large deposits can prevent many from buying an electric car, and complex, multi-year lease contracts can be daunting. With a subscription through elmo, you can drive your very own Ford EV but with none of the upfront costs or scary contracts.

Subscriptions are also completely flexible, meaning you can make changes as and when you need to without having to pay any massive fees.

How do you charge a Ford EV?

You can charge an electric car either at home using a charge point or a standard three-pin plug. There is also a vast network of public charging stations available up and down the UK, with more being installed by the day.

How much does it cost to charge a Ford EV?

The cost for charging an EV varies depending on where you are and how long you’re charging for. To charge your EV from home will cost approximately £8-15, whereas public charging stations will cost around £11 for 30 minutes of use.

How does temperature and driving style affect a Ford EV’s range?

Temperature and driving style can have a significant impact on your EV’s range. For example, heavy acceleration and high speeds will drain your battery quicker, as will extreme temperatures as your EV uses more energy to heat or cool the battery and cabin.

How will driving a Ford EV differ from a conventional vehicle?

The main differences between driving a Ford EV and a petrol or diesel counterpart are all positive. The ride is quieter, smoother, and thanks to impressive torque they’re quick off the line. There are also plenty of money-saving benefits, thanks to cheaper running costs and road tax exemption.

How safe is it to drive a Ford EV?

Driving a Ford EV is perfectly safe – EVs go through the same, if not more thorough, testing than petrol and diesel cars.

What is the price of a Ford electric car?

Ford electric car prices start from £50,030. With a subscription through elmo, prices start from as little as £949 per month and includes everything you need, such as insurance, MOT, breakdown cover and servicing.

Ready to drive your own Ford EV?

Like the sound of the many benefits that come with driving an electric car? A subscription through elmo makes it more affordable than ever. Browse our range of electric cars today and choose the right EV for you.