We have a range of electric cars from Hyundai available on our all inclusive monthly subscription model. Read on for more info on our range and Hyundai history in the EV space.

Why electric Hyundais stand out from the crowd

Our range of Hyundai electric cars

How long has Hyundai been producing EVs?

Why are electric Hyundais so popular?

What are their top features?

How do Hyundai EVs compare to its other cars?

Ready to drive your own Hyundai EV?

Why electric Hyundais stand out from the crowd

Style, comfort, great performance and great value are four components many look for when interested in making the switch to electric. Unfortunately, many drivers struggle to find an EV manufacturer that can tick all these boxes.

However, with Hyundai electric cars, you get each of these and more – which is why they make for such a fantastic introduction to the world of electric vehicles.

Our range of Hyundai electric cars

View our range of electric cars

How long has Hyundai been producing EVs?

Hyundai has actually been developing electric cars since the 1990s. Its first all-electric car was the Sonata Electric Vehicle, a prototype of which was produced in 1991. However, it wasn’t until 2010, with the BlueOn, that the technology had developed to a point where it was ready for the consumer market.

A few years later in 2013, Hyundai developed the first ever mass-produced hydrogen fuel cell car. This meant charging was fast and range was vastly improved, allowing Hyundai to use the technology in its EV development. Now, Hyundai has pledged to sell only all-electric vehicles in Europe by the year 2035.

While Hyundai produces great petrol and diesel cars, the benefits of an EV mean they’re the perfect choice for drivers looking to make the switch to electric: 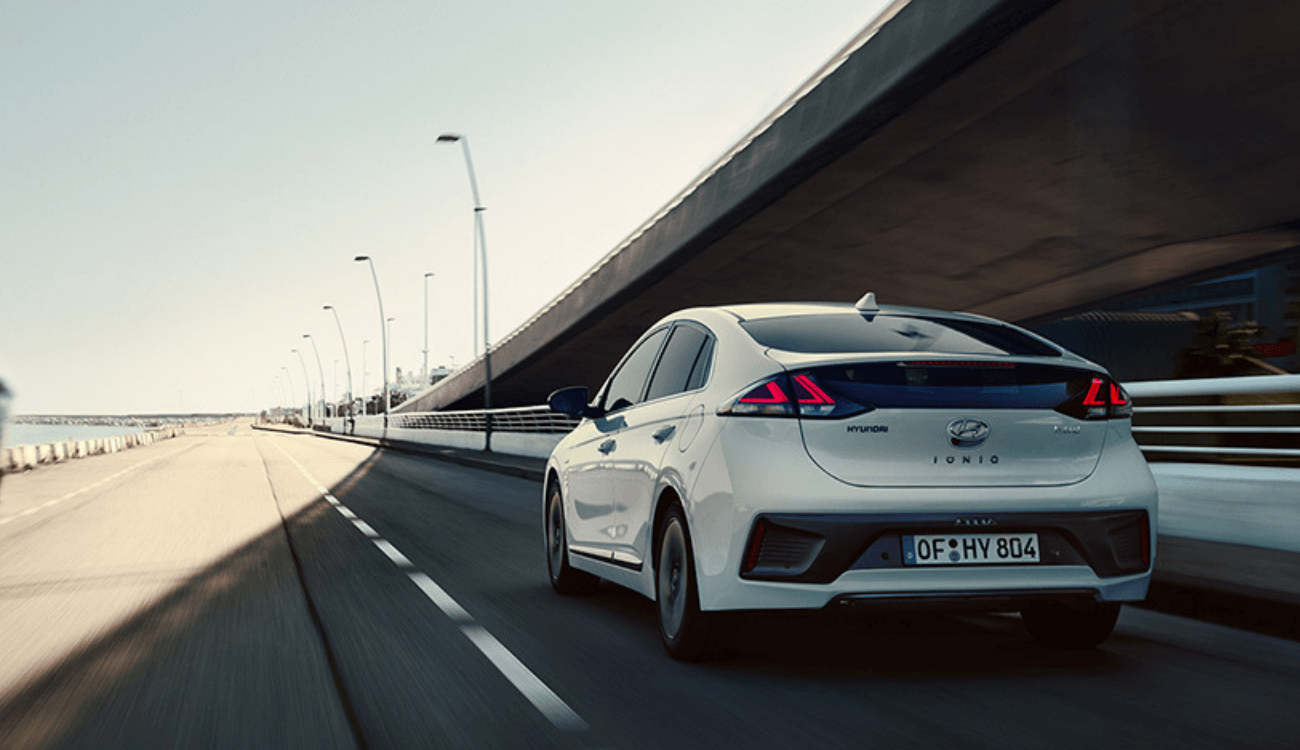 Why are electric Hyundais so popular?

Known for producing reliable and affordable cars, Hyundais are a fantastic introduction to EVs. With unique designs and impressive range, they’re built for comfort and performance, so drivers spend less time with range anxiety and more time enjoying the driving experience.

A survey found that Hyundai’s are the most reliable car brand. So, as EVs are already cheaper to maintain than petrol and diesel cars, a Hyundai electric car is always a safe bet. In fact, the South Korean manufacturer has made such strides it’s now the fifth-largest vehicle manufacturer in the world.

What are their top features?

As well as being reliable and affordable, Hyundai EVs come packed with enough technology to improve your comfort, safety and overall driving experience.

One notable feature is the Hyundai SmartSense, the Advanced Driver Assist system that introduces a number of safety features including autonomous braking and lane keep assist. There’s also Bluelink® connectivity, which gives drivers remote access to everything from heating to door locking.

How do Hyundai EVs compare to its other cars?

Hyundai EVs are every bit as stylish, practical and reliable as its fuel-based cars. That means, as well as offering all the features of its standard models you may have come to expect, they also come with huge cost-saving benefits.

Hyundai has pledged to spend billions developing its range of electric cars, which currently includes the Kona and the IONIQ. At elmo, if the EV you’re interested in isn’t currently available, just sign up for the waiting list to be notified as soon as it becomes available.

Are Kia and Hyundai the same?

Hyundai owns around one-third of Kia Motors, however, both manufacturers have their own philosophies and produce their own vehicles independently.

What country are Hyundais made in?

Hyundai was founded in 1967 in South Korea by Chung Ju-Yung, which is where it continues to make its vehicles today.

Hyundai is owned by Hyundai Motor Group, which also owns Kia and Genesis.

Hyundai is known for producing great, stylish cars that are reliable and affordable. They make for a great introduction to electric cars.

How to pronounce Hyundai

Hyundai produces exceptionally reliable cars. One study found that Hyundai is the most reliable car manufacturer in the world.

In part thanks to their fantastic reliability, Hyundai’s vehicles are perfectly safe – this makes them an ideal choice for a family car.

How much does the Hyundai Kona cost?

Hyundai electric cars are among the most affordable on the market, with costs starting from £20,766. However, the need for a large deposit still makes buying an EV tricky for many. With a subscription through elmo, you can drive your own Hyundai EV for as little as £609 per month and includes insurance, MOT, servicing, breakdown cover and more.

Ready to drive your own Hyundai EV?

Ready to save money with an electric car subscription through elmo? Browse our range of EVs today and see how you can start driving electric.