We have a range of electric cars from Peugeot available on our all inclusive monthly subscription model. Read on for more info on our range and Peugeot’s history in the EV space.

Why you should drive a Peugeot electric car

Our range of Peugeot electric cars

How long has Peugeot been producing EVs?

How do Peugeot EVs compare to their non-electric cars?

Why you should drive a Peugeot electric car

As the world begins to embrace the advantages of driving electric cars, there are plenty of manufacturers you should consider when looking to make that switch yourself. And one of those is French manufacturer Peugeot, which is set to ditch petrol and diesel models and become all-electric by 2030.

Our range of Peugeot electric cars

View our full range of cars

How long has Peugeot been producing EVs?

Believe it or not, Peugeot actually created their first electric car way back in 1941 in the midst of the Second World War. The Véhicule Léger de Ville, aka VLV (or Light City Vehicle, in English) was produced during a time when fuel was expensive and hard to come by – something not unlike present conditions.

The VLV was designed for urban use and had a maximum range of 50 miles and a top speed of 21mph. While not ideal, it did the trick during one of the most difficult times in European history.

However, just a couple of decades later in 2013, and with the EV industry seeing huge advancements, the Peugeot e-2008 was released. The e-2008 really showed what a modern French electric car could really do.

While Peugeot produces great petrol and diesel cars, the benefits of an EV mean they’re the perfect choice for drivers looking to make the switch to electric: 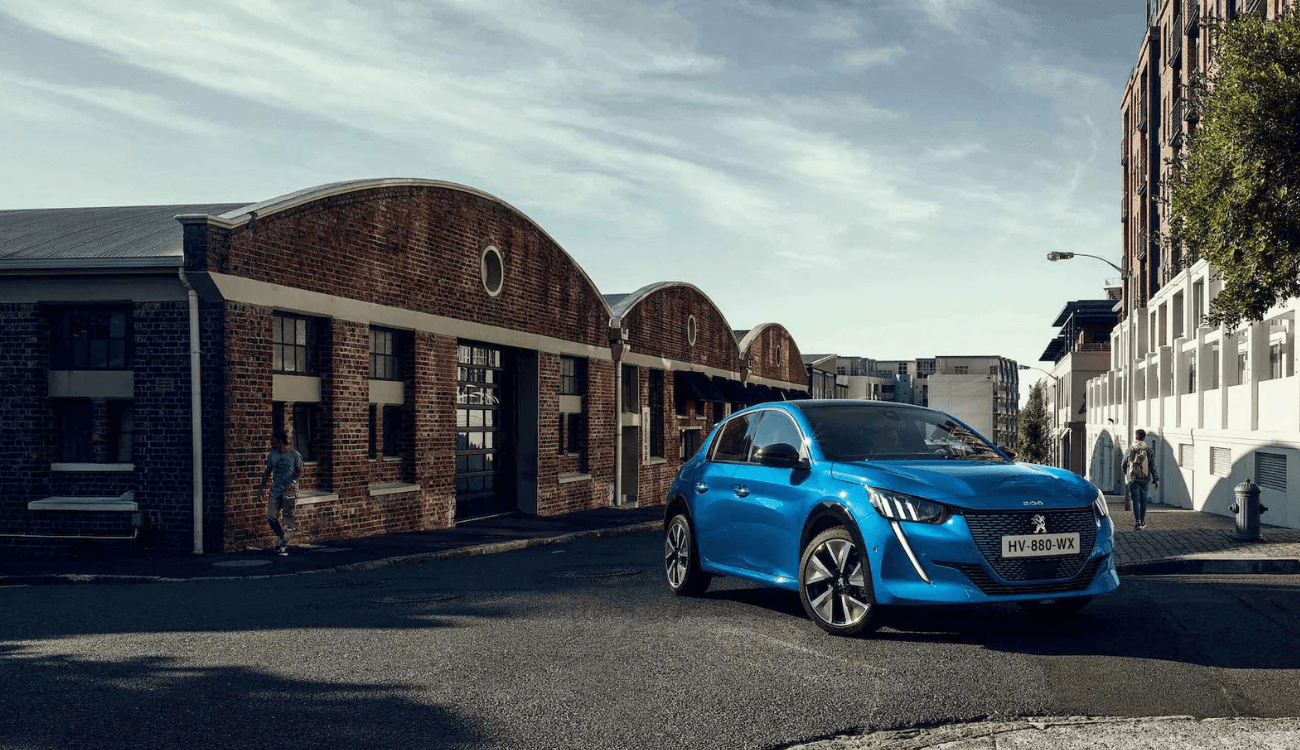 How do Peugeot EVs compare to their non-electric cars?

We’ve already highlighted how EVs come with a plethora of benefits – and one of the biggest highlights with a Peugeot electric car is how those benefits don’t come at the cost of what makes a Peugeot so great to drive.

When comparing a Peugeot EV to a petrol or diesel model, the speed and acceleration are comparable, the comfort is just as great, they’re more reliable, and they’re packed with even more technology.

On top of this, the price of an EV is in line with their combustion-engine equivalents, while having the advantages of being cheaper to drive, maintain and insure.

Having dabbled in the electric car industry since the 1940s, Peugeot has a wealth of experience that makes them a solid choice for those looking to make the switch to electric.

They are excellent all-rounders

Peugeots are stylish, roomy, reliable and affordable, which ticks many boxes for budget and environmentally-conscious drivers.

On top of this, in 2020 the Peugeot e-208 was awarded ‘Best Electric Car’ at Britain’s Best Car Awards and ‘Electric Small Car of the Year’ at the 2020 Electric Car Awards by WhatCar? Many factors contributed towards the judging of the awards, including how enjoyable it is to drive. A review from CarWow awarded the e-208 a nine out of ten, saying it has to be ‘near the top of your list’ when considering an electric car.

Peugeot produces fantastic and affordable all-rounders for those looking to make the switch to an electric car, without compromising on performance or technology.

An alternative to buying is a Peugeot subscription through elmo.

An elmo electric car subscription includes insurance, service, MOT, and breakdown cover costs, meaning driving a Peugeot EV of your own is more affordable than ever.

When did Peugeot start producing EVs?

What electric cars does Peugeot produce?

Peugeot produces a range of electric cars, including the e-2008, the e-208, the e-Rifter and the e-Traveller. Peugeot has announced that by 2030 they will be an all-electric manufacturer.

What is the price of a Peugeot electric car?

Peugeot electric car prices start from around £29,000. However, with an elmo subscription there is no deposit to pay, and you can drive your very own Peugeot from just £499 per month, including everything you need including MOT, insurance and breakdown cover.