We have a range of electric cars from Volkswagen available on our all inclusive monthly subscription model. Read on for more info on our range and Volkswagen’s history in the EV space.

Why you should drive a Volkswagen electric car

Our range of Volkswagen electric cars

How do Volkswagen EVs compare to their non-electric range?

Why you should drive a Volkswagen electric car

Volkswagen may not have the notoriety of others in the EV industry, but with a dedicated range of all-electric cars, the German manufacturer is fast cementing itself as one of the major brands drivers should consider.

Our range of Volkswagen electric cars

Believe it or not, Volkswagen’s first electric car was produced way back in 1970 with the Elektro Transporter. The design was influenced heavily by the T2 Camper, thanks to its ability to carry all the extra weight needed to generate enough power. The Elektro Transporter boasted a range of 43.5 miles, and – coincidentally – a top speed of 43.5mph.

In other words, it was great so long as you only intended to drive somewhere no more than an hour away. And don’t worry, they did develop a way to change the battery so you could get home again.

Fast forward four decades and the first modern Volkswagen electric car was the e-Golf, unveiled in 2013. However, with a maximum range of 118 miles, there was still some work to be done so that Volkswagen could compete with industry leaders.

Enter the ID., Volkswagen’s first dedicated range of all-electric vehicles, with 2019’s ID.3 boasting a max range of 336 miles. With their latest offering, Volkswagen truly entered the EV game. In fact, the ‘3’ in its name is to signify that Volkswagen considers the ID. its third major launch following the massively popular Beetle and Golf.

While Volkswagen produces great petrol and diesel cars, the benefits of an EV mean they’re the perfect choice for drivers looking to make the switch to electric: 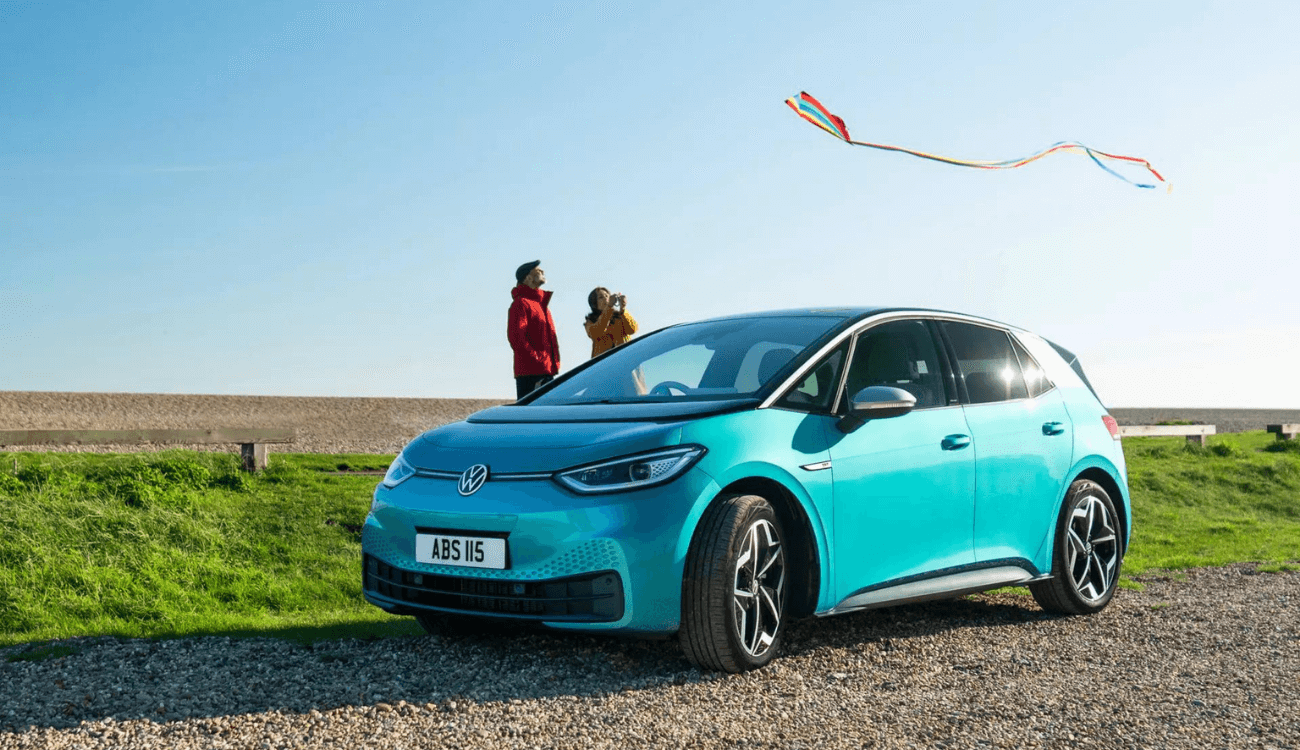 Being a dedicated, fully-electric range, ID.s provide plenty of standout features that make them serious contenders for drivers looking to make the switch to electric.

They have great range

Having come a long way since the days of the Elektro Transporter, ID.s have a great range that makes them suitable for commuting or city driving.

They are excellent all-rounders

While they may not have the power associated with luxury EVs, for a lower price point ID.s are strong all-rounders. They handle well and can accelerate 0-100kmph in less than ten seconds.

They are great to drive

While each model in the range offers unique features, each is packed with tech, including a complete infotainment centre, which makes driving fun and rewarding.

How do Volkswagen EVs compare to their non-electric range?

By the year 2035, Volkswagen has pledged to stop producing new petrol and diesel cars. However, in the UK this will come sooner, with the ban on selling new combustion engine cars coming into force from 2030.

With this in mind, Volkswagen aims to make more affordable electric cars, with the total cost now equal to – or lower than – equivalent petrol or diesel models.

We’ve already highlighted how running costs are cheaper in an EV than in combustion engine models, but maintenance and servicing costs are also reduced, in part thanks to the significant reduction in moving parts inside an EV’s engine. Because of this, EVs don’t require oil – something else that doesn’t need maintenance.

When you weigh up the advantages together with all the quality and functionality of Volkswagen’s other cars, it’s easy to see why an EV may be the better choice for you.

An alternative to buying is a Volkswagen subscription through elmo.

An elmo electric car subscription includes insurance, service, MOT, and breakdown cover costs, meaning driving a Volkswagen EV of your own is more affordable than ever.

What is the price of a Volkswagen electric car?

Volkswagen electric car prices start from around £35,000. However, with an elmo subscription there is no deposit to pay, and you can drive your very own Volkswagen from just £559 per month, including everything you need including MOT, insurance and breakdown cover.